A mentoring partnership between Express Media and Australian Poetry 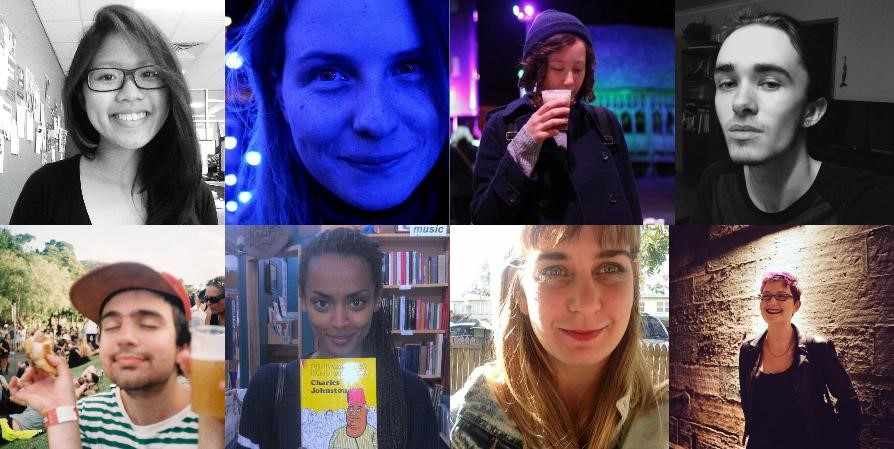 I have been a lover of words for a very long time but it was just a little over a year ago that I have been taken with poetry. For months, I had endeavoured to write a poem every day in an effort to cultivate discipline in making time for creativity. But, as I was focused on the volume and speed of putting work out, I have come to realise that I have not edited myself very well and have tended towards writing aimlessly. Through Toolkits, I am hoping to sharpen my editing skills and to write with greater clarity and better purpose. I occasionally dismantle the disarray in my mind on Instagram.

I’m a word-wrangler, book-eater and colour-smudger: trust me, it says so on my Instagram. I moved to Melbourne in 2014 after working as an editor and English teacher in Vietnam. Also in 2014, my flash fiction was longlisted for the Joanne Burns award and broadcast over Federation Square – my family travelled interstate to watch it, and secretly were more impressed with Brunetti’s coffee. Later that year, I received the Melbourne Young Writers Award for a short story with an embarrassing title (hint: if it’s longer than 10 words, it’s embarrassing). In my study at RMIT I landed a Dean of Students academic scholarship and recently graduated in the top two per cent of RMIT students. I’m currently writing a memoir, just because I enjoy arguing with middle-aged white men whether I’ve ‘lived enough yet.’ I have always been a writer, but my poetic portfolio only started when I dated a poet and said (under my breath) ‘I could do that.’ Last year I was shortlisted for the NUW Fair Australia Prize after swallowing my pride and writing an ANZAC poem. I’m super excited about Toolkits: Poetry – I hope to focus on poetic structure, and the use of poetry as political commentary.  Find me on Twitter and Instagram @Emily_Clementsy

I am originally from Auckland, New Zealand, currently residing in Sydney, Australia. I have a full length poetry book, Takahē (Scrambler Books, 2014), and a forthcoming micro-chapbook, a casual solitude (Ghost City Press). I am the poetry editor for Shabby Doll House and also co-run a reading series in Sydney called subbed in. I hope that in participating in Toolkits I will be exposed to different ways of thinking about poetry, and have more confident in both my voice and my instincts. Find me online at staceyteague.com or on Twitter @staceteague.

Mitch Cave is 18 years old and lives on the Sunshine Coast, Queensland with his white cat, Alaska. He has written book reviews for the ABC-owned Written Dimension Bookshop since he was 12 years old, leading to multiple publications in Orbit Magazine. Mitch also currently studies creative writing at the University of the Sunshine Coast. He hopes to learn how to perfect his free verse and prose poetry, as well as experiment with other forms of poetry through the Toolkits: Poetry program. He dreams of a world where more people care about art, especially poetry. You can see him getting angry at misogynists, homophobes and racists on his Twitter at @mitchtomascave and also see what antics he’s up to via his Instagram and Snapchat at @mitch.cave

Rory Green is a 20-year-old writer from the Central Coast of New South Wales. He is currently studying at the University of Technology Sydney with a personal focus on user experience and internet cultures. He has performed his poetry, among other events, at Subbed In and Sad By Sad West. After completing Toolkits: Poetry, he hopes to be able to edit the poetry of emerging writers, as well as his own, for publication in K-Zone. He can be found on Twitter @rorydoinstuff.

Saaro Umar is a 24-year-old writer, creative, and First Generation Australian by way of Ethiopia. Born in Melbourne, she currently lives in Canberra where she studies Herbal Medicine in between writing poems. She has written, created and made for as long as she can remember, and is fascinated by the regenerative power of the arts. She has written for Woroni and is interested in works on intergenerational trauma, home, love and loneliness. She is excited to have been chosen for ToolKits: Poetry and is looking forward to being in community with other writers from around Australia. Find her writing online at words-bysu.tumblr.com.

Gianina Carter is a 24-year-old writer and editor living in Townsville, North Queensland. She edits poetry for Voiceworks, and her work has been published in The Suburban Review, Scum and elsewhere. She loves attending writers festivals (a bit too much). Gianina writes mainly about gender and place and space. Throughout Toolkits: Poetry, she’s looking forward to collaborating with other writers, learning more about poetic forms, and finding stories in unknown places. She tweets occasionally @carternnia and really loves to talk about feelings and self-care and Gilmore Girls and coffee and the word ‘and’.

Zenobia Frost is a 27-year-old writer based in Brisbane. Her poetry and nonfiction have appeared in The Lifted Brow, Overland, Cordite, ARC (Canada), Scum and Voiceworks. In 2015, an ArtStart grant allowed her to study the contours of confessional writing with Warsan Shire and — in the Black Forest’s University of Freiburg — with Roxane Gay and Adrianne Kalfopoulou. Through Toolkits: Poetry, Zenobia will challenge herself to write braver, fiercer, weirder poetry — especially across digital platforms. She is hooked on the creative momentum regular workshops can create. Her debut collection, Salt and Bone, is available from Walleah Press. She tweets @zenfrost and is found at zenobiafrost.com.