This annual Anthology, produced by the national peak body Australian Poetry, focuses on a different State or Territory each year. In 2020, for the first time, it is the ACT’s turn. Some 23 of the 120 poems in the anthology are by ACT region poets. The book is guest edited by Sara Saleh (NSW), and Melinda Smith (ACT), who will jointly MC the launch event.

The event will feature readings from ACT poets Judith Nangala Crispin, Anita Patel, Isi Unikowski, and Merlinda Bobis, and from poets from across Australia including Laniyuk (NT + Vic), Shastra Deo (Qld), and Noemie Huttner-Koros (WA). There will be launch speeches by chair of Australian Poetry (ACT poet Martin Dolan) and the editors. The event also forms part of the Poetry on the Move Online festival and the ACT’s Where You Are festival.

From the foreword by Sara Saleh and Melinda Smith:

‘At such times, it can be easy to allow despair to have the last say. But do not forget Toni Morrison’s words: how this is the time for artists to go to work. Not just for the world we are in, but for the one we want to imagine and re-imagine and invent.’

‘perhaps we really are all ‘doomed’… But, at least with art and music and poems like these – we can bear it’ 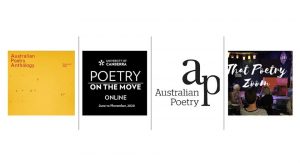