Gang of One: Sydney Launch 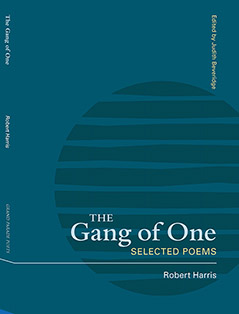 Sunday 26 May at 3pm at Better Read Than Dead, 265 King Street, Newtown

Join editor and renowned poet Judith Beveridge, publisher Alan Wearne, together with Steve Darmody and Toby Davidson for the launch of poet Robert Harris‘s collection, The Gang of One: Selected Poems. This generous selection of Harris’s gritty and humane poetry is a towering accomplishment by a deﬁnite ‘one-off’.

This is a FREE event but please RSVP via the link to the left.

ABOUT THE BOOK & AUTHOR:
Robert Harris (1951–1993) is a major poet who has until now missed out on the Selected Poems milestone, despite being heavily anthologised. Unaligned with any ‘faction’, though a close friend to many in the literary community, Harris is notable for the variety of his subject matter and inspiration.

Beyond this variety (which eschews novelty) there are two things which anchor the Harris opus: his commitment to non-jingoistic Australian themes and subject matter and the Christian faith that became his poetry’s bedrock. This volume represents a generous selection of his gritty and humane poetry, a towering accomplishment by a deﬁnite ‘one-off’.

PRAISE:
“Bob Harris was a poet you could never make assumptions about. His ﬁrst book might have had him typecast as an Overland poet (a very good one), the second as one who had picked up the poetics of early-70s New Poetry. Each subsequent book revealed Harris as a poet less bound by anyone’s expectations. The sum of this is a powerful and individual book that will hopefully ﬁnd a place for this wonderful poet.” — Laurie Duggan