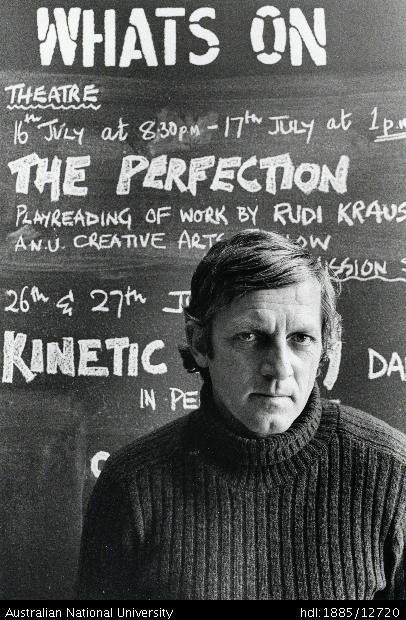 On 15 March 2019, one of Australia’s great poets passed away in Sydney.

Rudi Krausmann was born in Mauerkirchen, Austria, in 1933. After studying Economics in Vienna, he worked as a journalist for the Austrian newspaper, Salzburger Nachrichten. Following his arrival in Australia in 1958 he  worked as a freelance writer and editor, a part-time tutor at the University of New South Wales, a language teacher in Sydney and Melbourne and a broadcaster on Radio 2EA. In 1975 he founded Aspect: Art and Literature, which aimed to interrelate literature and the visual arts, and which he edited until it ceased publication in 1989. He was Creative Arts Fellow at the Australian National University in Canberra in 1980.

Krausmann published several collections of poems, mostly with small presses. In keeping with his desire to interrelate literature and the visual arts, some of them include illustrations by artists such as Brett Whitely and Garry Shead, while others were published in both German and English. As one might expect given his background, one of Krausmann’s main preoccupations was displacement and exile. He published concrete and prose poems but mainly favoured free verse.

More than 100 of Krausmann’s poems are available to read online at the Australian Poetry Library.